DEADWOOD, SD- (JANUARY 21, 2017), There is no better way to start off the day of AMSOIL Championship Snocross Series racing than with beautiful blue skies and mild temps for Round 8 of the US Airforce Deadwood Snocross Presented by AMG Peterbilt. After a cloudy dismal day for Round 7, Mother Nature cleared the skies, calmed the winds and poured in the sunshine.

Record crowd on hand for the final day of racing and the fans were not disappointed. Epic battles through the heats, bar-to-bar racing in finals, first time podium finishers and domination brought the crowds to their feet for the final day of the US Airforce Deadwood Snocross Presented by AMG Peterbilt.

Heat racing action saw 2016 Points Champion Montana Jess with a win, rookie Nickolas Lorenz finishing first in both heats is the number one Qualifier and Travis Kern also grabbing the checkered flags.  Points leader Aki Pihlaja not finding any luck in Deadwood, was forced to run the LCQ along with Round 7 winner Zak Mason also in the LCQ with both transferring to the main.

Off the elevated start into the first turn for the final, and it is big trouble early on which collected points leader Aki Pihlaja and put him in the back of the field. Up front it is Evan Daudt who grabs the Stud Boy holeshot and is off to the early lead followed by Lorenz and Kevin Wallenstein. Maxime Taillefer begins to challenge Wallenstein for third, makes the pass through the Polaris corner, but Wallenstein fights back to reclaim third, they drag race to the AMSOIL finish line, through the FXR Turn where Taillefer makes the pass again down the back stretch, trying to make a move on the inside, Taillefer gets tangled up with Lorenz forcing both riders off their sleds. Kevin Wallenstein and Cole Cottew both able to avoid the incident, moved into 2nd and 3rd. With Daudt continuing to lead, Aki Pihlaja is making his way through the field in pursuit of a podium spot. Mid-way through the race, several riders were involved in a pile up in the Polaris corner that took several laps to clear. Up front Daudt extended his lead to five seconds, Wallenstein was able to trim Daudt lead down to two seconds, but unable to catch him. Evan Daudt would go on to claim his first Pro Lite victory followed by Wallenstein and Cole Cottew staking his claim on the box grabbing his second podium finish of the season in third place.

Heat racing action saw some high flying action with a huge jump on the back stretch that catapulted the riders high above the Deadwood crowd. Petter Narsa, Lincoln Lemieux, Kody Kamm and Ross Martin all with first places finishes. Tucker Hibbert with some trouble in heat one was able to lock in a second place finish in heat two. Round 7 winner Ryan Springer unable to claim a spot on the front row of the final, ran the LCQ for a transfer spot.

Final race of the night, off the line and into the first turn, Tucker Hibbert pulls the Stud Boy hole shot, around the Arctic Cat corner, three wide through the corner, it is Kyle Pallin who makes the pass for the lead along with Elias Ishoel putting Hibbert back to third. Over the AMSOIL finish line and through the FXR Turn, Hibbert moves to the inside overtaking both Ishoel and Pallin for the lead again.

Pallin working his way around the Arctic Cat corner gets taken out forcing him out of the battle for first. Ryan Springer now in the mix gets by Elias Ishoel and settles into second.  Points leader Tim Tremblay worked his way up and challenged Ishoel for third, making the inside pass on lap 12. Tucker Hibbert extends his lead to 16 seconds takes the checkers and his 124th career win followed by Ryan Springer and Tim Tremblay for third. Kyle Pallin able to pass Elias Ishoel for fourth would later be moved to third after ISOC officials disqualified Springer for passing on yellow flag. 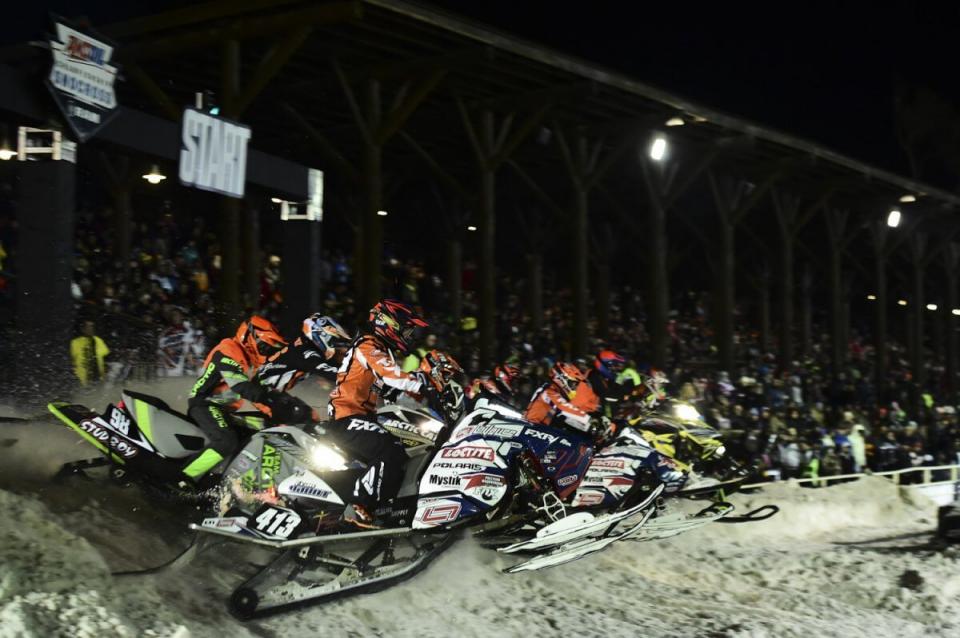