Record crowds and beautiful weather is what was in store for the Snocross fanatics at day two of the US Air Force Deadwood Snocross event at the Days of ’76 Sports Complex. With Rounds 7 & 8 proving to be pivotal rounds in the points championships, racers and teams worked hard to put on an unforgettable show for the fans. In the Pro Lite class Daniel Benham would continue his event podium streak and earn the victory in Round 8. Kody Kamm and Tucker Hibbert put on an epic battle here in the Black Hills but tonight the advantage went to Hibbert. Hibbert would make a charge from 11th to 1st and earn his seventh win of the season. With the season at the half-way point and the points championships taking shape AMSOIL Championship Snocross Powered by RAM is bound for a great second half of the season.

One of the most anticipated finals of the weekend, the Pro Lite final! With Cole Cottew coming off his first career win in Round 7 the sell out crowd was left pondering who it would be tonight in Round 8. As the light went green, Daniel Benham blasted off to the early lead with last years champion Aki Pihlaja in a near second. The two riders started to pull away from the field early in the race as points leader Jacob Yurk ran in the third position. Korbyn Anderson would start the race on his Ski-Doo in the top four while Andrew Lindholm rode fifth. Last nights winner Cole Cottew runs in the seventh position with Andy Lieders ahead of him in sixth. Cole Cottew starts to move through the pack like the evening before and now find himself in fifth after the 8 lap mark. Red plate holder Jacob Yurk starts to set his eyes on second place Aki Pihlaja as the race starts to wind down. Yurk would get close to the #128 but would fall short to the former champions speed ands composure. With five laps to go in the race Daniel Benham has nearly a 5 second lead but finds himself buried in lap traffic. As the racers see the flags symbolizing two laps remaining, Aki Pihlaja has cut the lead of Benham down to two seconds and Korbyn Anderson starts to close in on the third place of Jacob Yurk. As the white flew, it was still Benham leading over Pihlaja but this time with only a two second lead. Pihlaja would give his all en route to his first win of the season but would fall short to the Factory Arctic Cat riders speed in 2018. Jacob Yurk would fill the final position on the podium. Korbyn Anderson and Cole Cottew would round out the top five here at the US Air Force Deadwood Snocross.

The moment the sell out crowd has been waiting for, the Pro final. When the light went green reigning champion Kody Kamm earned the covenant Studboy holeshot award and jumped out to the race lead. Following the #1 Polaris was Logan Christian and fellow Arctic Cat racer Johan Lidman. After lap two and the race starting to take shape, Lincoln Lemieux passed the #52 of Johan Lidman moving himself into podium contention. Tucker Hibbert started the race in the 11th position and at this early stage he has already moved to third just five laps in. After eight laps Kody Kamm starts to gap the second and third place riders of Logan Christian and Tucker Hibbert. With ten laps completed in the twenty four lap main event, Logan Christian and Tucker Hibbert start to reel in the leader of Kamm. Three laps later, the 10x champion of Hibbert moves past his training partner Christian and into the second spot. With 9 laps remaining, the field remains the same with Kamm leading, Hibbert second, Christian third, Lemieux fourth and Lidman fifth. As the race nears the end and five laps still to be raced, Kamms’ lead has been shrunk down to one second. Two laps later, the lead is now .3 seconds and the red plate holder Hibbert is on the charge. Also heating up with three laps to go, is the battle for third. Lincoln Lemieux has caught third place rider Logan Christian and has officially made the pass. The two leaders have one and a half laps left, and Hibbert darts to the inside makes a move on Kamm and takes the lead. Tucker Hibbert would take his Monster Energy Arctic Cat one more lap to victory earning the sweep at Deadwood. Kody Kamm would solidify the second place position and Air Force rider Lincoln Lemieux charges hard to third. Logan Christian would earn the fourth spot and a great ride by Johan Lidman gives him a top five finish. 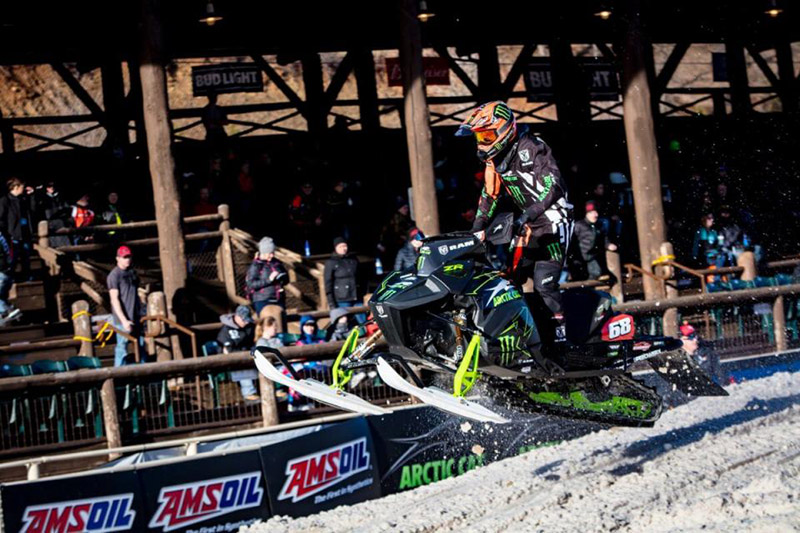 In Round 8 of AMSOIL Championship Snocross Powered by RAM, points leader Megan Brodeur jumped out to the early lead and ran away with the victory extending her points lead. Malene Anderson piloted her Arctic Cat to a second while reigning champion Elina Ohman earned her first podium of the weekend with a third. 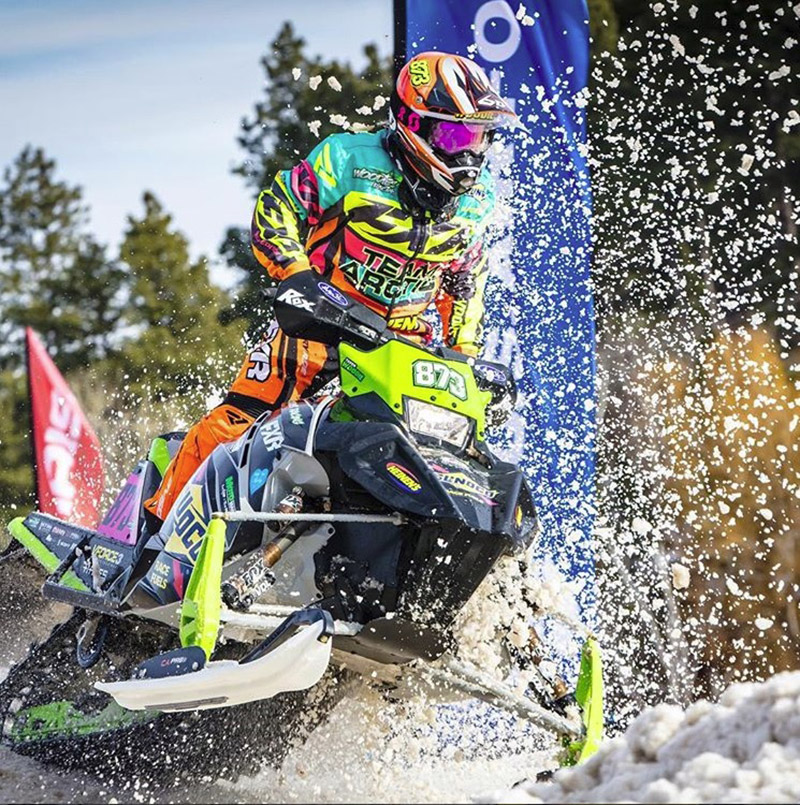