Recap from ACS opener in Duluth

Recap from ACS opener in Duluth

Weather had been the story for weeks leading up to the season-opening AMSOIL Duluth national. A timely cold front and blast of snow just days prior to the race allowed officials to not only build a suitable race track, but one of the longest course layouts in the 25-year history of the event. In the end, Mother Nature still had her say in the matter as a Sunday morning blanket of fog off of Lake Superior forced the cancellation of round two, but the “hometown” AMSOIL/U.S. Air Force/Ski-Doo team from just up the road in Aurora, Minnesota, still managed to grab the spotlight by going 1-2 in Saturday’s Pro Open final with Lincoln Lemieux racing to his first career win in the premier division.

For Lemieux, the win puts a stamp on what started as a fairytale ride three years ago. The relatively unknown racer from Vermont was plucked from the East Coast Snocross series on-demand while the AMSOIL Championship Snocross tour was making it’s annual stop in upstate New York. Already down a rider, team owner Steve Scheuring brought Lemieux into the trailer mid-weekend to merely have a presence on the track when Tremblay went down with a knee injury. Impressively consistent results landed the youngster a full-time spot on the team and after having his eyes opened to the requirement of Pro Open racing, he has responded with a number of podiums and flashes of being one of the all-out fastest riders on the track at times. Injuries plagued his 2015 season but he bounced back last year finishing third in the championship and with the confidence of this first win could challenge for a title this season.

Not to be overlooked was the performance of reigning champ Tucker Hibbert. T-Train doesn’t always start fast at Duluth, but always seems to leave the event on solid footing. A not so great start in Saturday’s final had him battling around the fourth position before coming off his sled in the corner following the finish line jump. The bobble cost him several seconds while he up-righted his machine and remounted. Then the chase was on. The remainder of the laps produced a heart-pounding scenario with all eyes bouncing between Lemieux stretching his lead on a clean track, the prospect of upcoming lappers, Tremblay’s charge to catch his teammate and Hibbert’s wild ride to get both of them in his sites.

All three riders were clearly the class of the field, riding in mid-season form, while challengers Kyle Pallin, Kody Kamm and Ross Martin showed plenty of speed with patches of off-season rust. Lemieux crossed the checkers with Tremblay in his air space while Hibbert fell just short of an amazing comeback. 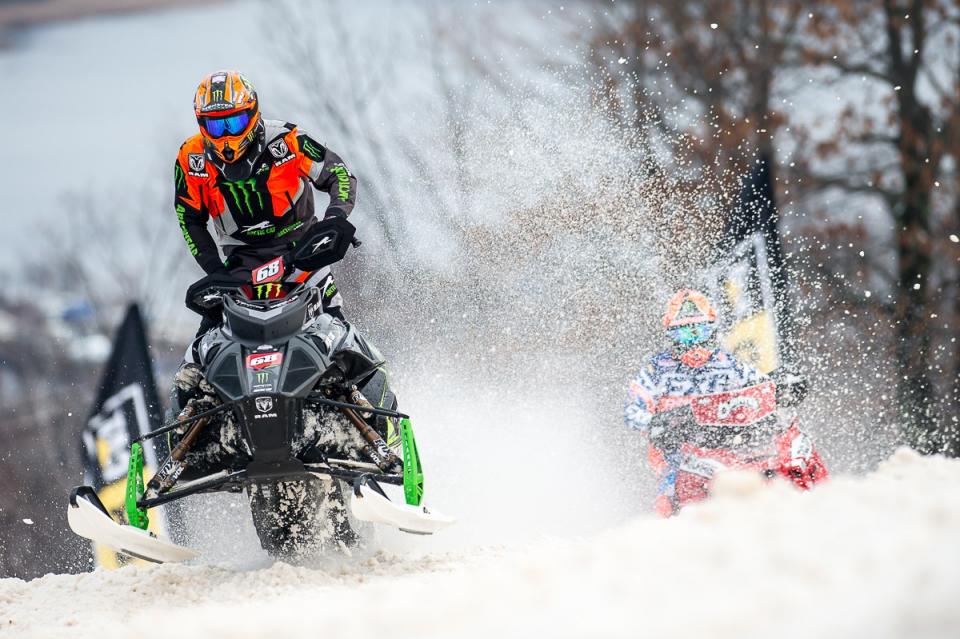 The Pro Lite final was a similar story of team dominance with Jack Link’s/AMSOIL/Axalta/Polaris rider Jake Angove going wire-to-wire with his rookie teammate, 2016 Sport class champion, Nick Lorenz finishing third. Angove destroyed the Lites field all day, going 1-1 in qualifying and quickly dispatching of challengers even when he wasn’t getting the holeshot.

In the final, Lorenz nearly ran down Angove getting to within a just a few sled lengths at times. A couple of rough landings midway through the final blew out an idler wheel on the 572 and forced him to conserve to prevent the track from ratcheting and slowing a possible challenge for the win. 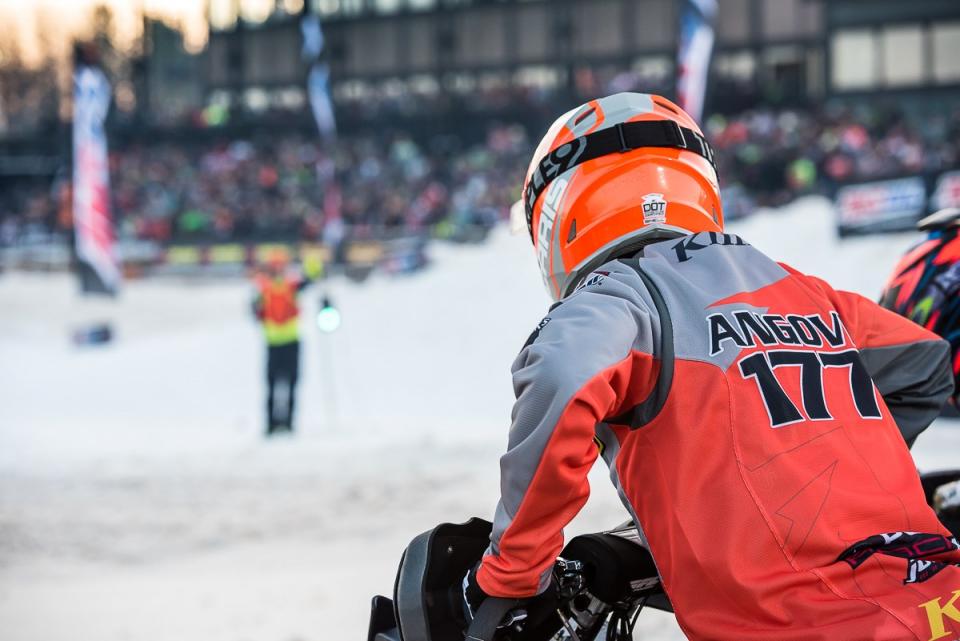 Taking advantage of Lorenz’s mechanical issue was Jimmy John’s/Lucas Oil/FXR/Ski-Doo racer Aki Pihlaja who finished second. Pihlaja was making his North American snocross debut coming over from Finland to compete in the series with the BOSS Racing team. The 28 year old is no stranger to big-league success, having won the 2016 Clash of Nations in the Open class over his new teammate Adam Renheim and Friday’s Dominator winner Elias Ishoel.

James Johnstad had a solid debut for his new team, KC Motorsports, piloting the FLY Racing Polaris to fourth overall with another European champion Marcus Ogemar Hellgren rounding out the top five. The biggest surprise in the class and perhaps of the weekend was 2016 champ Montana Jess struggling to make the final, having to go through the Last Chance Qualifier and missing the top for the first time with an 11th. 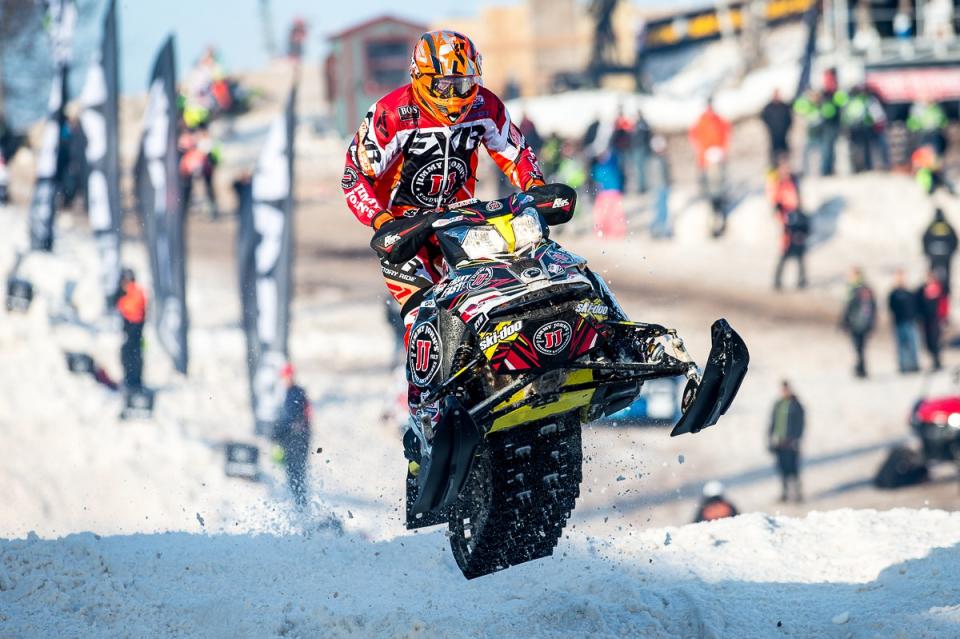 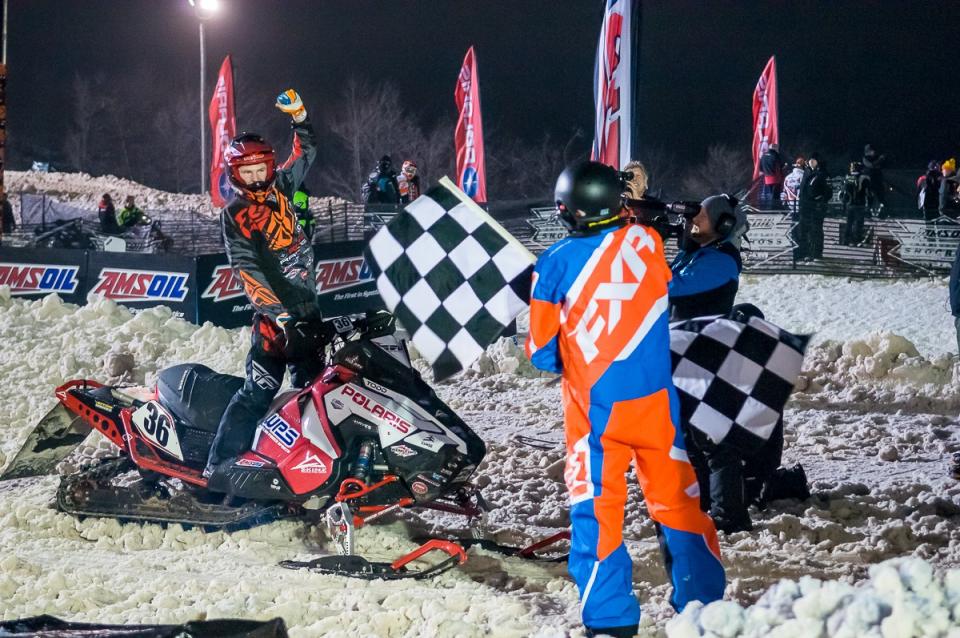 Montana Jess had a heat race win but a crash in heat two sent him to the LCQ and a second row spot in the final. 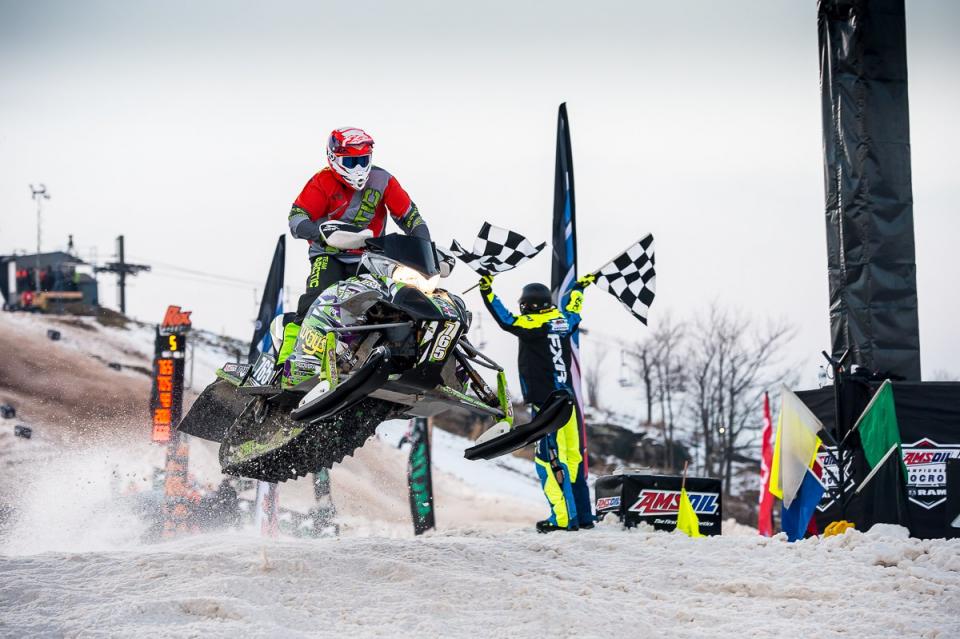 Zak Mason had a solid start to his season after missing most of last year. Eighth in Pro Lite.

Elina Ohman made quick work of the Pro-AM Women’s class and is a heave favorite to take over the crown vacated by Marica Renheim. 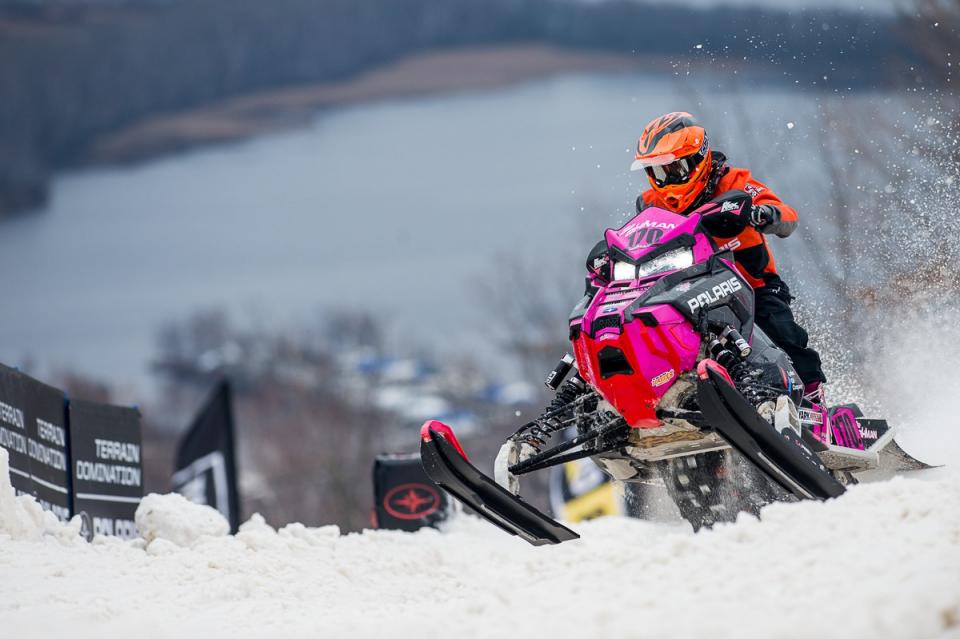 Large numbers of entries in the Amateur classes were a great sign for the health of snocross. 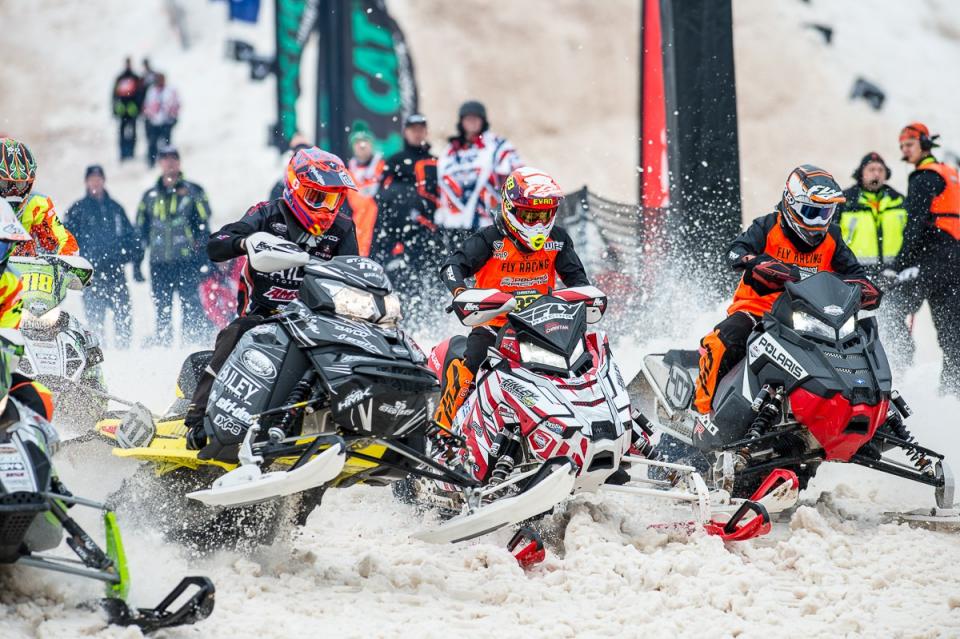 Elias Ishoel took a hard hit when he was landed on during Dominator qualifying Friday night and relapsed into his over the edge riding style for much of Saturday’s racing. 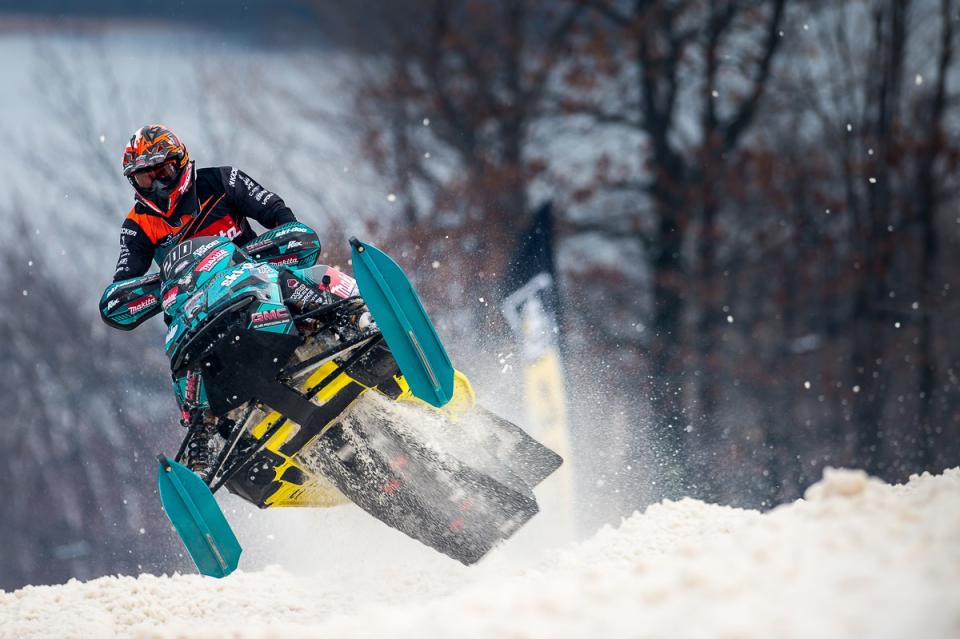 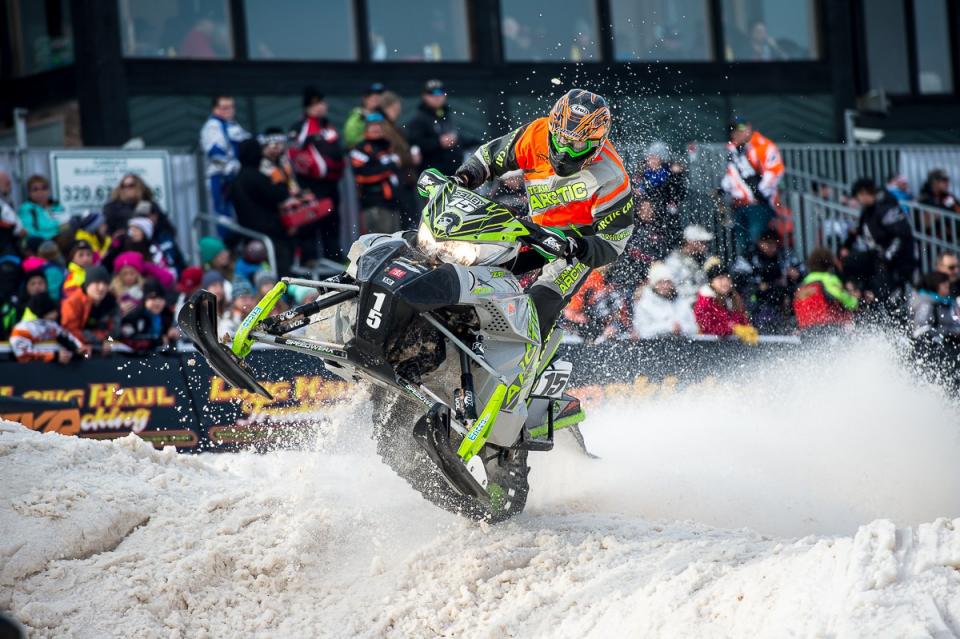 Harris Huizenga made his way from North Dakota to put a smackdown on the Snowbike class at its first national event. 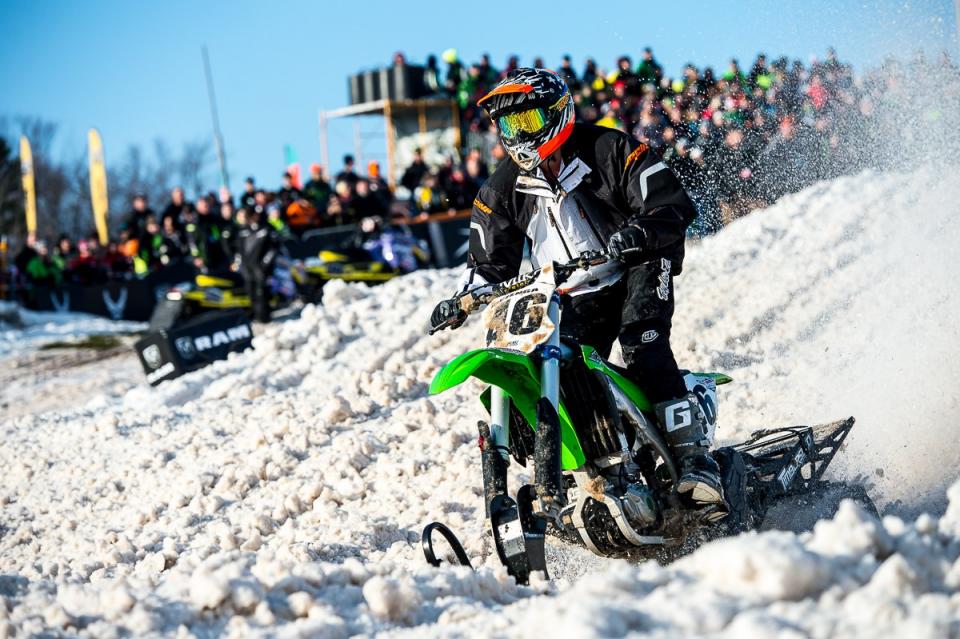 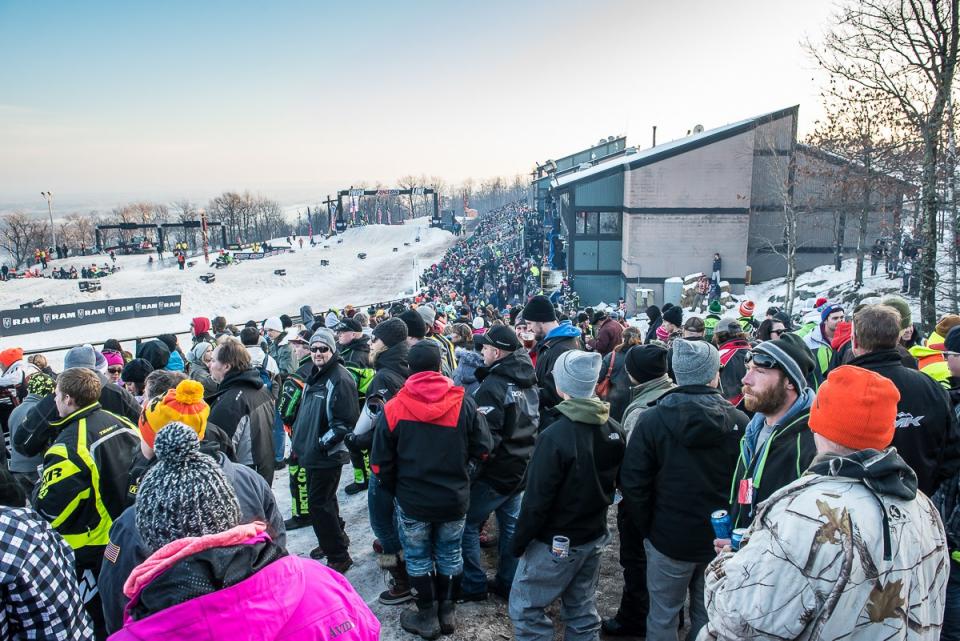 Justin Broberg made the big show for his new team Woodies Racing and looked his stylish self doing it. 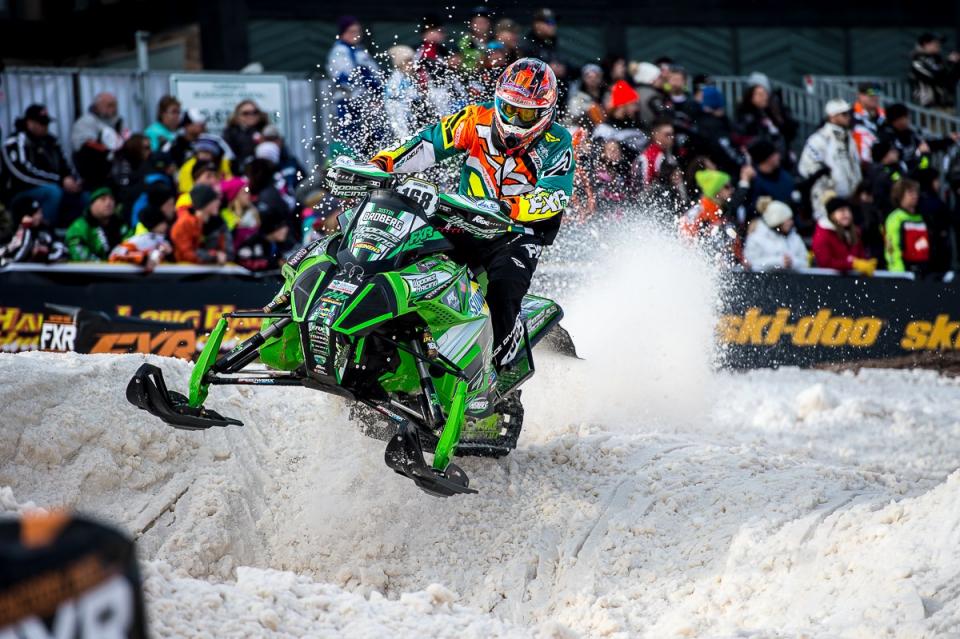