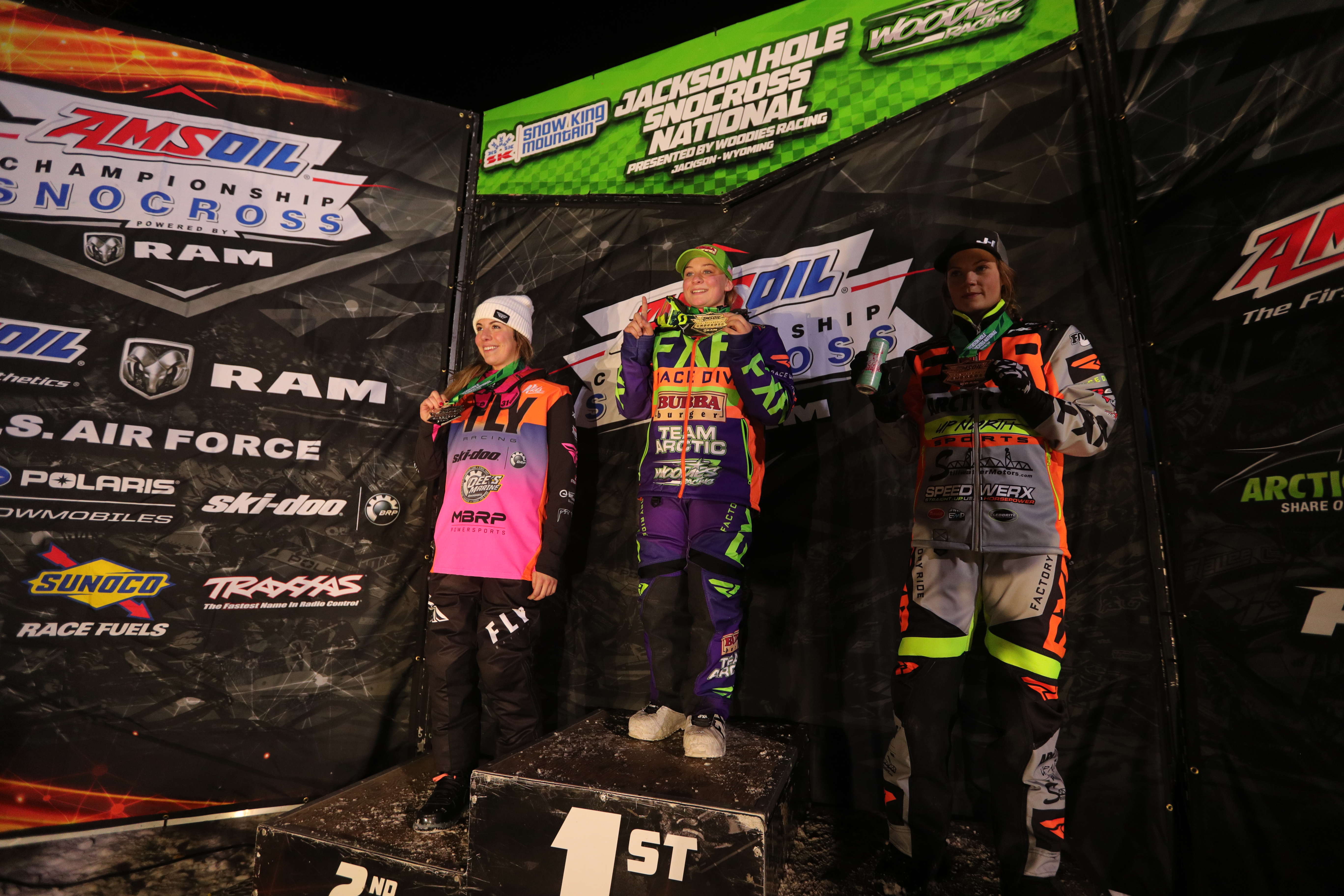 In the second year at Snow King Mountain, the Jackson Snocross National Presented by Woodies Racing brought the high-flying excitement of snocross to the mountain snowmobile community. Woodies Racing, the presenting sponsor, had a good showing in the team’s hometown.

Kaden Woodie grew up racing in western Wyoming. He ran well in his two qualifying races, finishing 2nd and 1st. Kaden battled clutching issues in the final, finishing 7th. Woodies Racing supported rider Beau Tibbetts had an awesome Sport final, securing his first ever win in the class. As the primary sponsor, and good friends, Woodies Racing joined the Tibbetts Racing team on the podium after the race to celebrate.

Taven Woodie came into Round 3 second in points in the Pro Am Women class. Taven finished 2nd and 1st in her qualifying rounds. After a strong pass of points leader Meaghan Brodeur, Taven charged down the hill at Snow King, caught a ski, and flipped off the track. She piloted her wrecked Arctic Cat to a 9th place finish.

Nisse Kjellstrom qualified for the Pro Lite final with finishes in his heat races of 3rd and 4th. With four laps remaining in the final, Nisse got squirrely at the bottom of the downhill rhythm section, flipping his sled. Nisse got back on and finished the race in 13th.

In the Pro Class, Montana Jess struggled through technical malfunctions in the first round of qualifying, deciding to take the rest of the evening off to be fully ready for Saturday racing. Johan Lidman won the LCQ. Picking the last spot on the front row, Johan rode to an 8th, finishing higher than his qualifying position.

Sport class racing on Saturday lived up to its reputation of being very competitive. Kaden Woodie rode to a 4th and a 1st in qualifying. Headed into the final, Kaden rode through major roost most of the race, taking a hard fought 6th.

Both Taven Woodie and Nisse Kjellstrom bounced back well from their Friday misfortunes. Taven went into the Pro Am Women final with a 2nd and 1st. Taven navigated her way to a Stud Boy holeshot, leading the entire race for a win in front of her hometown crowd. The Woodies Racing team celebrated a second podium Saturday night with Pro Lite rider Nisse Kjellstrom’s 2nd place finish.

A large crowd was on hand to watch the Pro class finish a great weekend of snocross racing in Jackson Hole. Johan Lidman qualified for the final with 2nd and 3rd place finishes in qualifying. Montana Jess entered the final through a top five finish in the LCQ. Both riders improved upon Friday’s performance, Lidman was the highest finishing Arctic Cat rider in 5th, and Pro rookie Jess in 10th.

Woodies Racing will have a small break for Christmas, to resume racing at the Dayton of snocross, Canterbury Park in Shakopee, MN for round 5 and 6, January 4 and 5th. 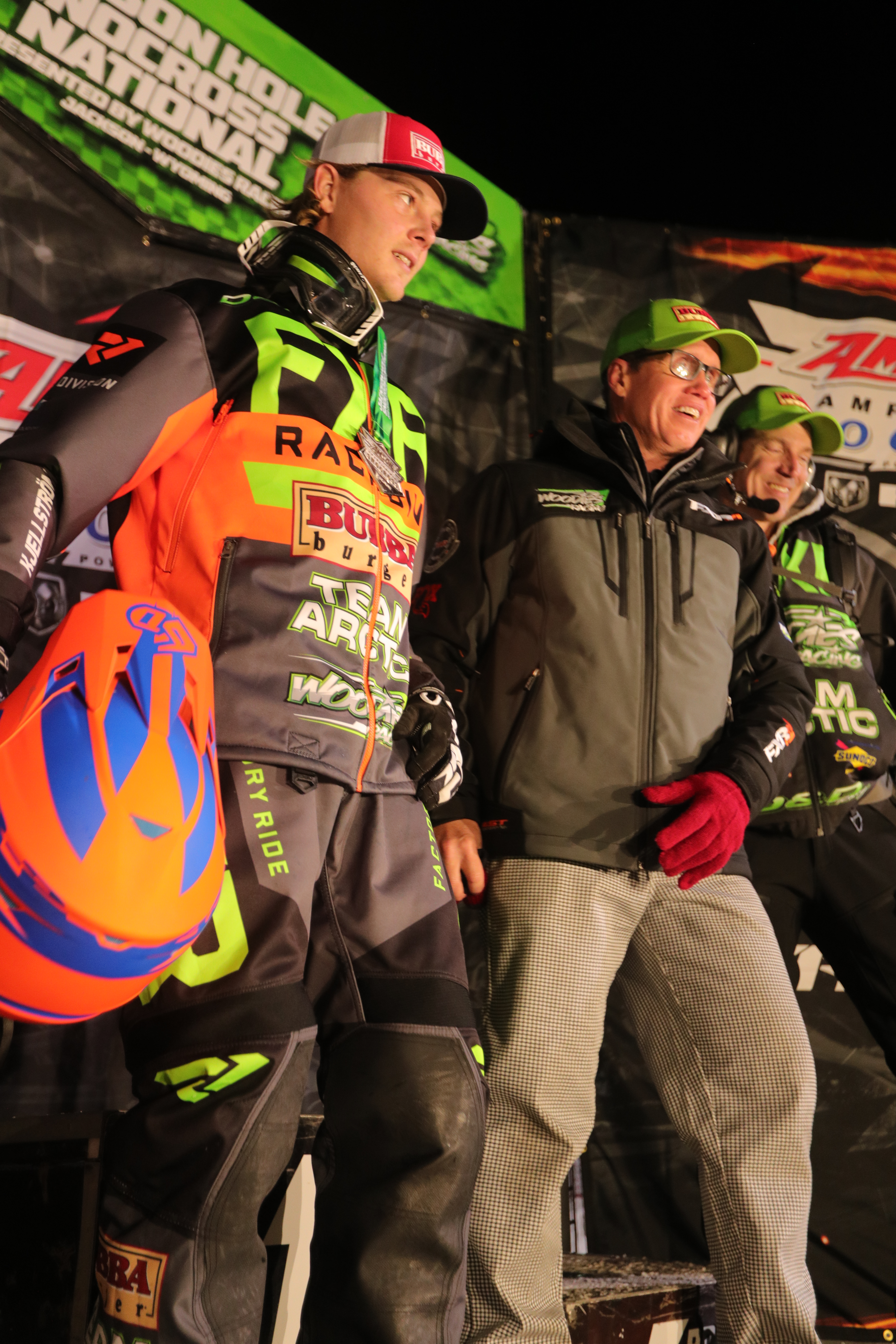 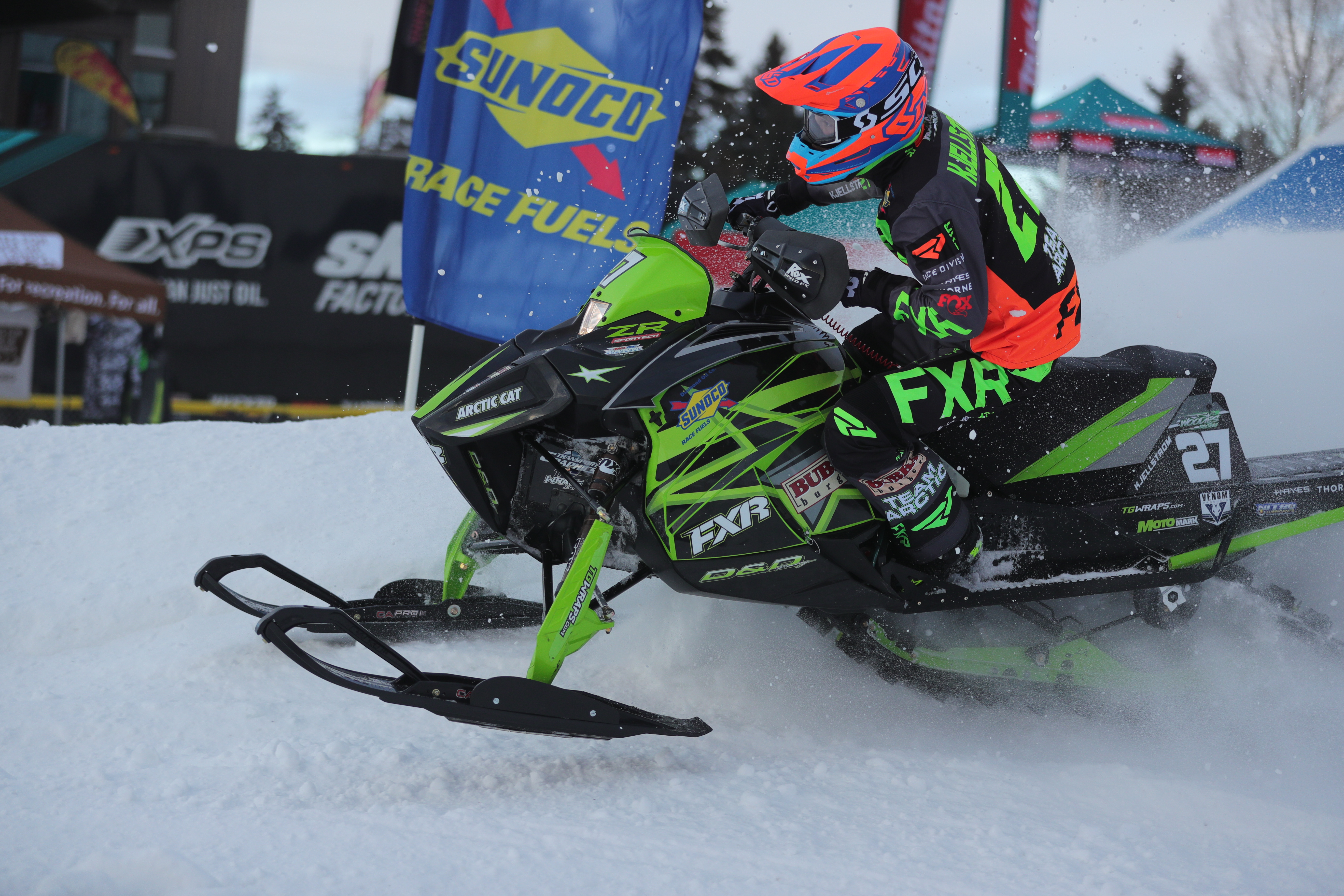 About the Author: Nancy Lauseng